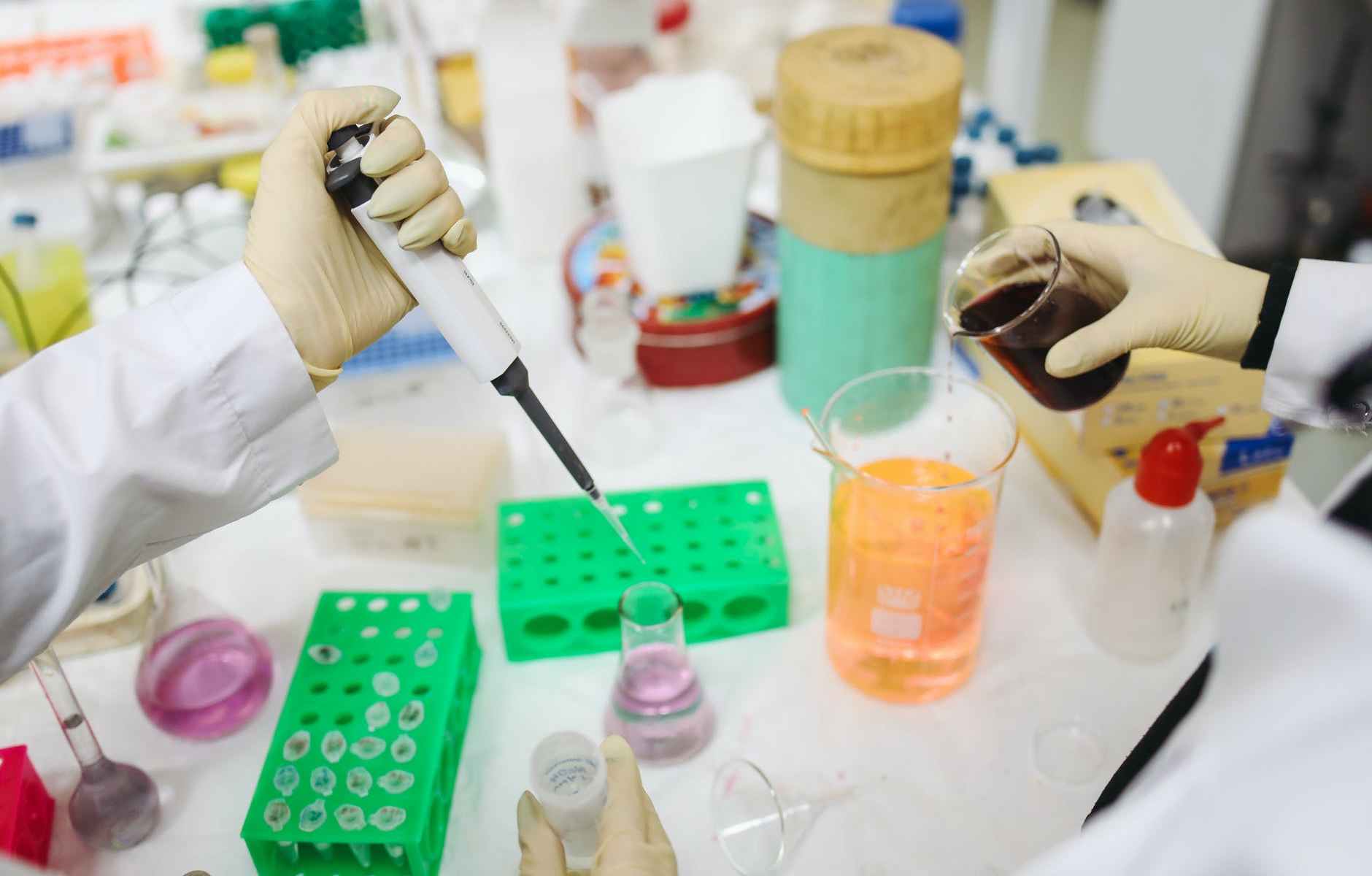 Synthetic biology can enable us to sustainably produce everday products. Here's a discussion on a paper that shows us how to do just that.

The biotech industry is a diverse one, and biomolecules for natural products are just part of that sector. In this paper, Two-step pathway for isoprenoid synthesis, we are exploring isoprenoids that are used in medicine, agriculture, cosmetics, and more. Isoprenoids include the red color in tomatoes (lycopene), the flavor and fragrance of citrus fruits (limonene, valencene), malaria drug precursors (amorphadiene), cancer drug precursors (taxadiene), the curcumin of turmeric, and the bilobalide of Gingko biloba (which qualifies as one of my favorite scientific names ever.)

Previously, we decided we wanted to produce these compounds using microbes. We can do that with metabolic engineering, a subset of synthetic biology. In this field, we engineer living things to produce industrially relevant molecules, such as isoprenoids.

Unfortunately, we discovered that the native MEP pathway (native, at least, in our E. coli host) is inefficient and can lead to carbon loss. However, the researchers of today’s paper discovered – and verified – a new, streamlined pathway using three enzymes (a promiscuous kinase, an IPK enzyme, and an IDI enzyme for balance). With this pathway, you can feed E. coli isoprenol and prenol – or just one of them, courtesy of IDI – and get isoprenoids. They named this the Isoprenoid Utilization Pathway (IUP).

Now, we want to test out this pathway, prod its strengths and weaknesses a bit. To do that, we’re going to have to use some synthetic biology tools like plasmids, promoters, and constitutive vs. inducible systems. You can brush up on the components of a synthetic biology toolkit in a previous post about engineering photosynthetic organisms.

Metabolic engineering cares about directing the flow of carbon in a cell. In the last post, we discussed how the metabolism of a cell is like a network of pipes with carbon flowing through various molecules. Here, we have an IUP system to begin. But it’s an open valve; now, we need more pipes to direct the flow to an actual sink. Our goal is a pool of some isoprenoid molecule.

The first pool will be lycopene, which the researchers chose as a token isoprenoid to test the IUP system with.

One thing has to be done before we can test this, however. Remember the MEP? It’s the pathway native to E. coli (our host of choice) used to make isoprenoids. It’s inefficient, and if it’s there, some of it will channel towards lycopene as well. This would mess with our experiment and hinder us from interpreting how well the IUP is working. So let’s knock that out – which we can do easily with crispr (a genome editing tool that can be used to cut out genes, among other things).

Turns out, MEP is actually essential for a cell to survive. Isoprenoids include over 50,000 molecules, after all – many of them are rather important for the cell to work properly. So we can’t just make a MEP knockout (KO) strain; it would kill the cell.

Instead, the researchers had to do something a little extra fancy. They knocked out the MEP by knocking out a single gene on the MEP pathway. Then, they put three genes on a plasmid and transformed it into the host.

Those three genes code for enzymes that, if you feed the cell mevalonate, can repair the function of the deleted (knocked-out) gene. So now we have a strain that still dies all by itself, but if you grow it in media that contains a mevalonate supplement, you can rescue it.

Now this strain can be used to test the IUP system. Throw in a plasmid with IUP genes, and grow the strain in a media without mevalonate. Does it grow? Yes. Therefore, IUP can rescue the MEP-knockout. It’s a passable alternate isoprenoid pathway.

From there, we can throw in yet another plasmid – the one with the lycopene pathway. Now we don’t just know that IUP works; we can measure how well it’s working. In Fig. 2A, the researchers test for optimal carbon source. Isoprenol or prenol? And also, how much of it should you feed the cell?

Since the IDI enzyme balances out the DMAPP and IPP (both needed for the isoprenoid pathway), you can get away with feeding the cell only isoprenol (to become IPP) or prenol (to become DMAPP). Turns out, you get the most lycopene by feeding it a particular isoprenol concentration (Fig. 2A). These kinds of tests are used all the time in metabolic engineering experiments, where a useful genetic edit can be missed if the cell isn’t growing in its optimal conditions. A cell is a complex system and must reach some sort of zen, some kind of balance, between (1) being healthy and (2) producing as much of your product as possible.

Seeking a Zen of Cell Dynamics

There’s a pool, though, of DMAPP leftover in the cell.

In Fig. 2C, we see that even in the strain producing lots of lycopene, there’s still some DMAPP sitting around that’s not getting used. Perhaps we can tap into that; ideally, all of that carbon would go straight into lycopene production.

How can we use up more of the DMAPP? We want to increase the flux going through this pathway. The researchers here are using replicative plasmids, so one of the ways they can do this is to increase the number of plasmids in the cell.

Unlike integrative plasmids, replicative plasmids do not knit themselves into the genome of the host. Instead, their DNA stays floating around in the cell. Plasmids like this can have different ‘copy numbers’ that define just how many copies they make inside a cell. In Fig. 4B, the researchers test plasmids with 15 copies in the cell, versus 20 copies, versus over a hundred copies.

While the increase from 15 to 20 leads to a major increase in how much lycopene is produced, shooting the copy number up to 100 actually lowers the lycopene. Again, this demonstrates that there are lots of variables that go into making a cell happy. Cells balance entire webs of chemical reactions, and our lycopene pathway is just one of them. We have to seek out the sweet spot that brings the cell into a sort of zen mode, where it balances health with high productivity.

We should also keep an eye on metabolic intermediates. Before, we saw DMAPP build-up in the highest lycopene producer. Why is some DMAPP left unused? Tracking the metabolites (the steps along the way) helps us diagnose where bottlenecks might be preventing carbon flux.

Ideally, the carbon flows from the feed to the end-product. For example, from isoprenol to lycopene.

But if there is leftover DMAPP, there’s a bottleneck somewhere, and some of the carbon hasn’t reached lycopene yet.

In other words, the IUP pathway is doing a pretty good job of supplying carbon to these isoprenoids – even more than they can handle. To get more lycopene, you’d have to optimize the lycopene pathway itself; IUP is already optimized.

IUP vs. MEP: The Final Countdown

Alright, so you’re assigned a project (at school or work or an internship or wherever) to produce, I don’t know, amorphadiene, so that you can hand it off to your lab partner (who wants to use it to make an antimalarial drug). Do you go for engineering the native pathway? Or do you knock out the MEP and insert the IUP?

We’ve already established that IUP is (1) a super easy little two-step pathway (the MEP is a tangly nightmare) and (2) high flux (it provided more carbon than the lycopene and taxadiene pathways could use).

In the experiment tracked in Fig. 5, we have a final argument, and it also falls in IUP’s favor.

If taxadiene is produced via MEP, the carbon came from glucose and will be labeled.

If taxadiene is produced via IUP, the carbon came from isoprenol and will be unlabeled.

The experimental results show high metabolite levels (IP, DMAPP, GGPP, and more) when both IUP and isoprenol are present. Small amounts of metabolites are generated by the MEP pathway (no isoprenol added). But in the end (Fig. 5F), we see that by far the most taxadiene is produced by isoprenol-fed IUP E. coli strains. We also see that 96.3% of that high titer is unlabeled; it came from IUP.

So, MEP results in a low titer. It produced less than 5mg/L taxadiene. IUP, however, boosted titer to almost 15mg/L. Even when MEP and IUP are competing in the same cell, the IUP generates 96% of the final product, outpacing the native pathway by a landslide.

Metabolic engineering is a subset of synthetic biology. It attempts to use living things to produce industrially relevant molecules such as isoprenoids.

Isoprenoids are naturally produced in some plants, but its not terribly efficient. Sourcing an isoprenoid like lycopene from tomatoes would take a lot of tomatoes. I recall making orange oil in an organic chemistry lab; a huge sack of oranges was quickly distilled into vials at each lab bench containing fractions of an ounce. There are certainly products that can be efficiently harvested from plants, but for many compounds, it’s just impractical.

Another common source of materials is through synthetic chemistry, from petrochemicals. The carbon source here is oil, and it can be reacted on in a chem lab to produce fragrances, cosmetics, materials, and agriculturals we use today. But this has its disadvantages as well, first of which is environmental concerns of being an industry based off of fossils fuels.

When it comes to large and complicated molecules, synthetic chemistry gets more and more difficult. Or expensive. Or both. Cells are a lot better than us at synthesizing these complicated compounds. If we can get them to do the chemistry for us, we can harvest them, economically, from an environmentally friendly source.

For this reason, synthetic biology is an exciting new field, with research going on in academia and industry. In today’s journal club, we’ve explored some of the work that goes into turning a cell into a sustainable industrial resource.